Can cities adapt to the new jobs crisis?

In the year 2018, humanity is in the midst of the third industrial revolution, and in some places it is taking the first steps in the fourth (cyber physical systems). The process of computerization and automation has affected almost all industries in the last three decades, and it is far from slowing down.

When thinking about future society — that is society in 10 years’ time — there must be a strong understanding that what was right for yesterday, is not right for tomorrow.

If current predictions for 2030 are correct, our reality will look vastly different than today even within this short time, and not just the urban environment, but also our communication methods, organisational management, societal norms and the way we work.

According to Nesta, the UK innovation foundation, a number of factors, such as technological changes, globalization and demographic changes, will affect employment by 2030, reducing demand for some occupations and increasing it for others. Generally, those jobs that are made up of routine tasks are at a greater risk of decline, whereas those creative occupations requiring interpersonal and cognitive skills are well-placed to grow. In other words, such a shift will likely affect more low-income workers than those middle or high class creatives.

Richard Florida, one of the most prominent urbanist of our time who recently published the book “The next urban crisis”, has also detected this trend towards creative jobs, but he is not as sure we can keep up with the pace of the change and compensate the loss of routine jobs with creative ones. According to his research, the proportion of creative jobs is increasing slightly, in a slow process: 1.4% per year over the past half-century, on average. At that rate, it will take another 25 years to achieve the same amount of creative jobs as routine ones in the US.32

Other studies draw an even grimmer picture, the US bureau of labor predicts that in 10 to 20 years, about 50% of the jobs we know today will disappear with the remaining occupations those that require compassion, understanding and moral judgment, such as nurses, teachers and police officers.

The study do not offer a prediction on how many job types will be added, simply because until they have been conceived of, it is not possible to know what they might be. As technology races ahead, however, it is clear from all studies that low-skilled workers will be reallocate to tasks that are less susceptible to computerization — i.e., tasks requiring creative and social intelligence.

But even if assuming all workers will obtain the right creative and social skills for the jobs of the future, according to these researches there is no guarantee there will be enough jobs for all job seekers, and if these jobs will provide sufficient income for maintaining the rising standard of living.

At least in the UK, cities and jobs are likely to see an increase in demand by 2030, according to study conducted by the Centre for Cities in London. As has happened in other industrial revolutions, the labour market will continue to evolve — new occupations will arise and some occupations that already exist will become increasingly important. However, this is likely to play out differently across the country continuing the current trend of concentration of capital and investment in university cities and world cities.

Over the last 100 years, the evolution of the economy has meant that the ability to access and use knowledge has become increasingly important for businesses, people and cities. Those cities that have best been able to provide access to knowledge are the ones that have best been able to deal with change over the last century. Today’s worst-performing cities are also those most exposed to the risk of job losses in the future.

Another change that is already underway is in the way we work. The new work patterns of the creative class are becoming less and less place-based, allowing them to work remotely, attend meetings via video calls and rely less on office services. This is great news for suburban districts and small towns able to offer cheaper housing rents to those who no longer need to commute to the city.

However, cheap rent cannot entirely replace a creative ecosystem, and further conditions are needed to wake up a sleeping suburb.

In order for cities to deal with the changing work patterns, there must be a shift in policy, and for struggling cities in particular; policy which creates the conditions that support the development of knowledge, and the use and exchange of it.

A key element of this would be to provide residents with the skills they need to be successful in a labour market that is likely to be ever more dominated by non-routine work.

• Prepare: Give younger generations entering the labour market the right set of skills and knowledge to succeed in the jobs of the future.

• Adjust: The current workforce should be given adequate resources to adjust to changes in the labour market.

• Compensate: Individuals least able to adapt, need to be given adequate compensation for their job loss but should also be given retraining.

Productivity and innovation are drivers of long-run economic growth, the centre concludes, but there remains the question of how to foster and sustain those characteristics and channel them towards the common’s well being.

* Image is taken from: Pop up works — A mobile office. Stockholm, Sweden 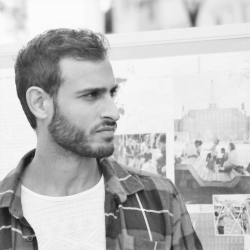 Yoav is a program manager in Berlin Innovation Agency and a multi disciplinary Urbanist who set to facilitate the future of cities, communities and individuals in the global jungle. With special passion to social entrepreneurship Yoav works to support a more holistic approach to the startup world and help to find solutions with wider impact.
All posts

The latest from our blog

Taking Advantage of Empty Space in the City

Any cookies that may not be particularly necessary for the website to function and is used specifically to collect user personal data via analytics, ads, other embedded contents are termed as non-necessary cookies. It is mandatory to procure user consent prior to running these cookies on your website.